Hours after the House Democrats announced official articles of impeachment, President Donald Trump traveled to Hershey, PA to rally supporters and spread his “Keep America Great” message. Despite the rainy weather, tens of thousands made their way inside to the GIANT Center to hear the President speak with many waiting outside in the elements to hear him in front of a tailgate-like crowd.

As President Trump took the stage a little after 7:30 PM Eastern Time, the mood in the crowd was supportive, energetic, and defiant towards Democrats. Supporters of the president wore “Make America Great Again” hats, donned American flags on their back, and brought banners and signs to support their choice for 2020. 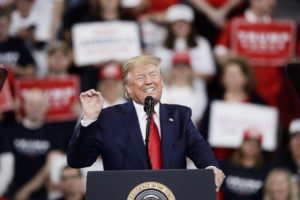 President Trump used the rally tonight to focus attention on the accomplishments of his administration, including the recently-announced US-Mexico-Canada Agreement to which Democrats announced their public support of earlier today. “The silver lining of impeachment and this witch hunt is it’s the reason they approved USMCA,” Trump told thousands of supporters in Hershey. He later claimed that Speaker Nancy Pelosi pushed the deal forward because she “wanted to smother this impeachment crap.”

“It’s a huge deal and it plays down the whole impeachment because they’re embarrassed by the impeachment,” President Trump said. “Our poll numbers have gone through the roof because of her stupid impeachment.”

“This is impeachment light,” Mr. Trump said, “This is the lightest impeachment in the history of our country by far.”

President Trump is only the fourth president in the history of the United States to have articles of impeachment drafted against him. Assuming votes fall within expected party lines, it appears likely that Trump will become the third president to be impeached by the House of Representatives. A full House vote on impeachment is expected to occur as early as December 20th.

Despite the threat of impeachment, the Trump campaign remains focused on delivering its message to the American people. In an exclusive interview with The Lion 90.7fm, Kayleigh McEnany, Trump 2020 National Press Secretary, said, “None of us want to see impeachment, none of us want it to happen, but it is fueling our supporters to stand up and say, we’re taking a stand.” Asked whether she believes impeachment will negatively affect the Trump campaign in polling, McEnany responded by saying, “Not at all. If it affects us in any way, it will energize our base.”

Although Trump continues to rally his base with campaign rallies across the country, polls remain split amongst general election voters. In recent Quinnipiac University polling, Democratic front-runner Joe Biden leads President Trump 51%-42% with regards to the general electorate. However, recent polling as of December 7th out of Emerson College for the Iowa electorate closes the gap in favor of President Trump, 49%-45%. 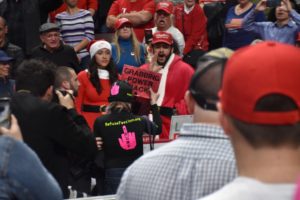 A protester is escorted out of a Trump campaign rally in Hershey, PA (Photo by Alex Mellott, The Lion 90.7fm)

During President Trump’s rally, a protestor dressed in a black knit #MeToo hat interrupted the president’s remarks. As the protestor was escorted out by security, the protestor could be seen holding a pink sign and wearing a black shirt that both said “Grabbing Power Back” and had an image of a hand raising its middle finger.

Trump used his rally to launch continued attacks against his favorite political targets, including the Intelligence Community whistleblower, former FBI employees Peter Strzok and Lisa Paige, House Intelligence Committee Chairman Adam Schiff, and various 2020 Democratic presidential candidates. He also used the rally to tout his administration’s accomplishments in border security, rolling back government regulations, and increasing military defense spending. Chants such as “Build the Wall” and “USA” rang throughout the GIANT Center during many of Trump’s remarks.

Trump faces an uphill task with the largest voting block in the United States: college-aged students and millennials. While millennial voters are resonating more with messages of Democratic candidates such as Bernie Sanders and Elizabeth Warren, the campaign believes the administration’s accomplishments speak for themselves. 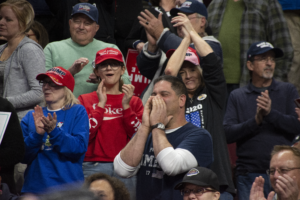 Supporters of President Trump react to his campaign rally. (Photo by Alex Mellott, The Lion 90.7fm)

“[There are] 160,000 new jobs in Pennsylvania since Trump took office. Unemployment has hit the lowest level in 10 years thanks to the work this president has done,” McEnany said. “I’m a millennial myself. My peers have had a hard time finding a job out of college, but the President has helped to bring jobs back to America.” Asked why undecided voters should consider casting their ballot for Trump, McEnany explained, “He’s authentic. What he says is what he believes. It’s not poll-tested, it’s not focus-group approved, it’s what President Trump believes is best for the American people. His authenticity is not something I think we’re going to see in American politics again for such a long time.”

President Trump is scheduled to appear in Battle Creek, MI next week to continue his presidential campaign tour before taking a break for the holiday season.