Continuing to lead the way in innovation, their flagship announcement, the LG Signature OLED TV R, is the world’s first 8K resolution television that rolls up into its base when not in use. More than a demonstration of engineering prowess, LG’s breathtaking product boasts picture and sound quality that is second to none, all in a form factor that gives home TV viewers infinite possibilities in designing their perfect viewing space. 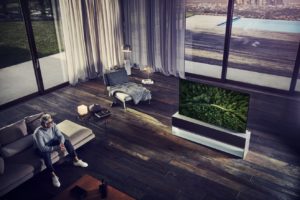 Last year, LG took the crowd by storm when they unveiled the design innovation of their “wallpaper” TV, the LG Signature OLED TV W, which featured a picture-on-glass design that practically floated off the wall. Now, LG takes this concept a step further with a design that offers convenience and functionality in any area of the home. Since the LG Signature OLED TV R can roll up completely inside its base, it can be placed in front of windows or other obstructions to create an immersive viewing environment in practically any setting. The remarkable AI picture and sound quality powered by LG’s second generation α (Alpha) 9 intelligent processor and deep learning algorithm puts this breathtaking TV in a class of its own. Users can use their normal voice to get things done with Amazon Alexa, a new addition to LG’s AI TV lineup in 2019, as is support for Apple AirPlay 2 and HomeKit. With support for AirPlay 2, users can easily play videos from iTunes and other video apps, music, photos and directly from their Apple devices to their LG SIGNATURE OLED TV R. With Apple HomeKit support, customers will be able to control their LG TV using the Home app or by asking Siri.

Maintaining functionality with this design is critical. That’s why LG added a special “Line View” that retracts the TV to a minimal size to create a functional display space. This line view can be used to display currently playing music, weather, information, and even smart home controls. When fully retracted, users can still experience immersive audio powered by LG ThinQ’s artificial intelligence platform that creates room-filling sound for any occasion.

Stay tuned to The Lion 90.7fm for continuing coverage of CES 2019 and our hands-on review of the LG Signature OLED TV R later this week.